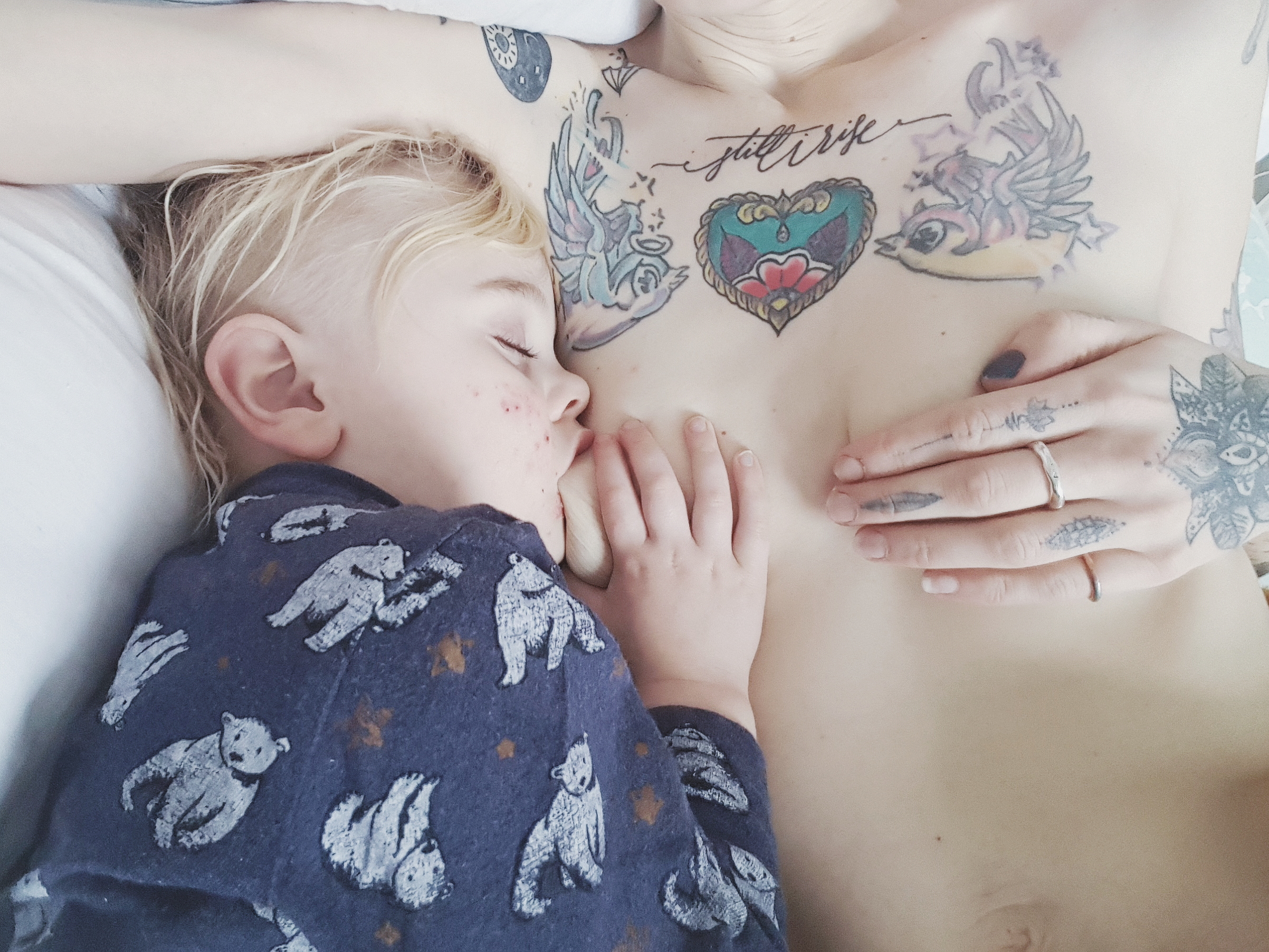 When I found out I was pregnant with Beastie, I hoped that we’d have a more successful breastfeeding journey than I did with my girls. I desperately wanted to feed them myself, and did for each of them, but not for very long. Without any support at home, I gave up far too easily. In fact, I got so many negative comments on breastfeeding from their father, that it felt impossible to carry on. With no support from health visitors, and no other family around, as well as me not having the strength to stand up for myself, breastfeeding seemed like a monumental task. I have no doubt my guilt over abandoning breastfeeding lead to the PPD I suffered after babies two and three.

So during my fourth pregnancy, I planned to breastfeed but promised myself that if it didn’t work out, then I wouldn’t feel too guilty this time around. Little did I know that I would still be breastfeeding over three years later!

Breastfeeding a toddler can be a touchy subject, though I’ve never had any negative comments directed at me. In fact, I’ve had quite the opposite having received so many people saying how wonderful it is that we are ‘still’ feeding.

British breastfeeding rates are some of the worst in the world – apparently, 81% of mothers have tried breastfeeding at some point, but only 34% were breastfeeding at six months and 0.5% at 12 months. The World Health Org. recommends nursing at least until age 2, and suggests that to do otherwise deprives the child of custom-made nutrients and antibodies, yet people still see breastfeeding an infant older than one has ‘odd’.

I’m lucky in that the circles I am in, it is totally normal for mums to be breastfeeding their toddlers, many of my friends are feeding children of a similar age to Beastie {or older}, so to me, it would be stranger to not still be feeding him.

A couple of weeks ago, Beastie was really ill. He had impetigo and was poorly with it – fever, exhaustion, no appetite – the only thing he wanted was to be in my arms and nurse. I was so glad that I could offer him that, especially as he wasn’t drinking either – I knew that my milk was helping him get better, and keeping him going.

Breastfeeding a three year old isn’t the same as feeding a newborn. He doesn’t feed every hour night and day {well, not always}, he doesn’t have to root for the breast – he can ask for it and understand if I tell him ‘not right now’. Somedays he’s so busy, he forgets about boob all day long, other days it’s all he wants. He generally sleeps all night long, though on occasion he’ll stir and want boob to go back to sleep {we co-sleep}. He always starts and ends his days with a feed too.

I’ll be honest, there are days when I wish we had weaned already. They’re the days when he climbs on me every time I sit down and asks if he can ‘open my boob’, when I’m tired and all touched out. But I have no plans to wean him until he is ready – whenever that may be. I will happily feed him in public, I have no issues with what other people think of it – I’m as discreet as can be {not always easy when you’re feeding a toddler},  usually when we’re out he is too busy to want it, but if he’s upset or hurts himself then of course he does – I guess it’s a little bit like it’s his comfort blanket.

Will we still be feeding in a years time? I don’t know. If he wants to then, yes, most likely we will.

Did you breastfeed your toddlers?

Welcome to the family little chucks!

Compelling Biographies to Get Inspiration From

A ‘Do Nothing Day’